Greetings all, yesterday was a wonderful hot sunny stop at famed Devils Island.  Teeming with wildlife, monkeys, birds, large rodent looking things with no tails hopping about and a scarlet macaw.  It was perfection.
In the morning before we landed at the port of call, we saw a Discovery Channel documentary about the island, the prison and escape strategies.  Although very interesting, with my prior work in the custody center and in probation and parole for almost thirty years, I found much of it very disturbing.
How a country treats its prisoners is a strong indication of the ethics and values of that country.  I saw some parallels of how things are done in modern day with how they took place in the barbaric system under French government in the French Guiana country and colony of Devils Island.
We walked the prison section, the museum, the children’s cemetery,  the convent, church and barracks for the staff as well as the home for the warden.  And in modern day most is left to disrepair, however there is a place in the bay for tourists to land their water craft, come ashore and visit, have lunch in the small cafe and possibly a hotel on sight.
Our Oceania Regatta ship tendered a short distance to land in this place of historic significance.
We went to shore as a large group and soon separated based naturally on who wanted to walk the distance around the island, and who wanted to start with the buildings more centrally located.
In several spots we encountered the wildlife.  Monkeys playing and frolicking in the trees, swinging on branches, watching us intently, likely looking for handouts of food.  The forest was alive with bouncing branches and squealing noises as monkeys played and communicated with each other, and us.  On the ground hopped and or walked these rodent type creatures, the size of a large rabbit, small ears like a mouse or rat, no tail, dark brown with white under belly fur, nose wiggling.  Not too bothered by the guests invading their otherwise quiet existence on this isolated and for the most part abandoned island.
Fragrant and brightly coloured flowering bushes and trees were plentiful.  As well within the area of the prison, some very old gnarly trees with exposed roots, reminding me that the trees may carry the painful memories and tragic stories of previous inhabitants held against their will in this place.  Large bumps, twisty branches and rough bark markings seemed to say, “I am holding the pain of this place”.  I take a moment of quiet reflection to honour the lives lost.
Story after story of escape attempts from this treacherous place, rough salty water seas, and dense jungle, hot hot sun, limited supplies and physical personal body challenges, as well as being chased and hunted would all be factors against the strongest of human positive emotions, hope.
I was left with questions of how the human spirit could resist the call of the seas while trapped within the walls of the prison?  Apparently escapes were attempted every day and by every prisoner at some point, and for some multiple attempts were the only way to eventually find their way out.
I saw butterflies flitting through the floral and cotton bushes.  There were circadas, large winged insects, making loud noises in the trees.  A solo macaw was hanging about, flying and resting, begging for handouts in the cafe / bar.  Beautiful bird reminding us of the wildlife on this tropical island.
The vistas of beautiful Caribbean Sea waters crashing up on shore can be seen from almost anywhere on the island.  Large Palm trees full with fruit, coconuts laying on the ground.  This was the most picturesque stop so far, for me.
That is it for now.  Today a sea day.  I have been out for my morning walk around the decks jogging track, then breakfasting with the gals and now sitting in a window seat in Horizons lounge.
We were here last night for Happy Hour, then dining in Toscana at a table for six.  Dinner was fabulous.  After, a brilliant show by the assistant cruise director, featuring the songs and stories from the musical sensation group, The Four Seasons including Frankie Valley.  Amazing.  After, an hour of Karaoke with our group and some new friends … And a bit of dancing, women in a circle to the Jukebox / iPad music arranged by one of the crew.  The guests steadily left the lounge area and by midnight it was all over.  Time zone change gave us an additional hour of sleep.  Lovely times, being enjoyed by our group of 14. 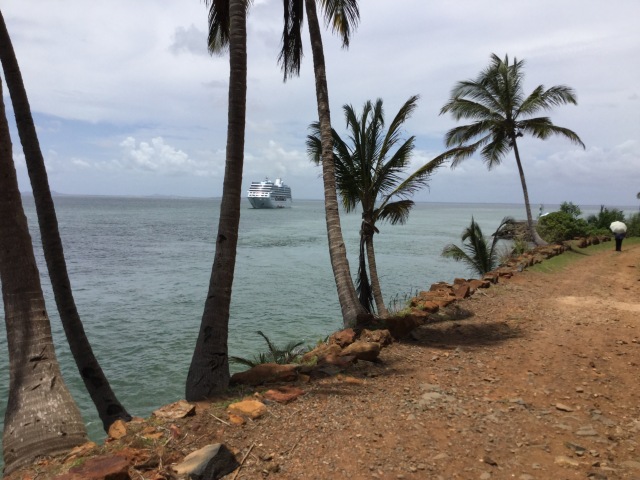